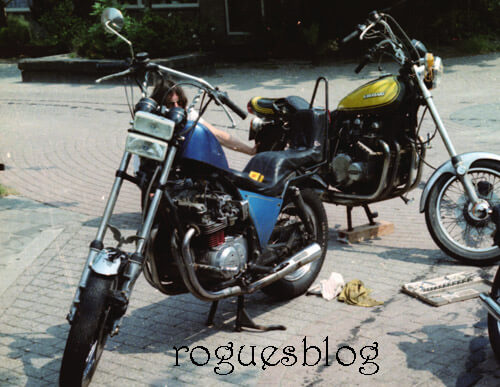 Bikes from Brass and Toon 1981. A year later most jap bikes were replaced by Harleys in our club. In the beginning most Rogues rode Kawasaki 650 and 900. We'd cut the frame and dropped the seat, lowered the shockmounts, replaced the stock rear wheel with a 16 inch one, had six to eight inch over forks, skinny gastanks, homemade seats and custom bars and sometimes dual square headlights. Mostly spraycan paintjobs. We started partying with other more established clubs whose members rode chopped Harleys and chopped Limeys. They laughed at our bikes but we were proud of them anyway.