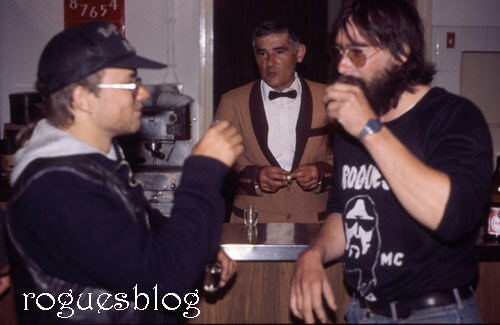 When in Yugoslavia RMC members Schweik and Toon had a contest who could drink the most slivovitz. After ten shots or so Schweik had to go to the toilet, I followed him to see if he was not going to puke. I told him he could and I would not tell. But he just had to piss. When we walked back to the bar he talked as if he was sober, one minute later I could'nt understand a word anymore. Schweik was gone. He tried to walk outside but puked all over the place. We laughed our asses of but the barowner called the police on us. Toon stayed to drink a few more and had to crawl back to his tent. The next day he woke up and discovered a huge pile of shit in front of his tent. He was mad and cursed the one who had shit like an elelphant. Two days long he was blaming us for it. When we left, he took his tent apart and found his own(!) shirt full of shit….he started laughing, 'never knew I could shit that much haha. ' he said.