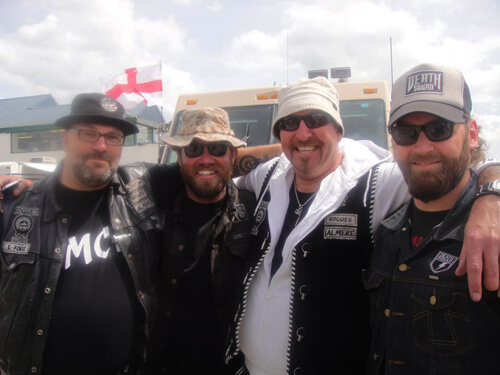 While Opmeer brothers Wicky and Lurch, Almere brothers Stud and Etter rode to Luxemburg to celebrate Wicky's birthday at High Chapparel, Almere members Bagger and Redneck rode to Dunkerque in France to visit the Suicide Choppers Crew. Together with them they rode to a big hotrod meeting In Chimay Belgium. As soon as they rode in on thier choppers, Deathtrap Jonathan jumped in front of their bikes, screaming, 'ROGUES IN DA HOUSE'. Our Euro-traveling friend had just rode back from Biaritz to stay with Robert near Dijon and from there to the Harley Brothers in Lux. With them and some friends from Antwerp Belgium he was enjoying the Chimay vibes when our guys rode in. Together they had a blast!!!! Next time again? Hell yeah!