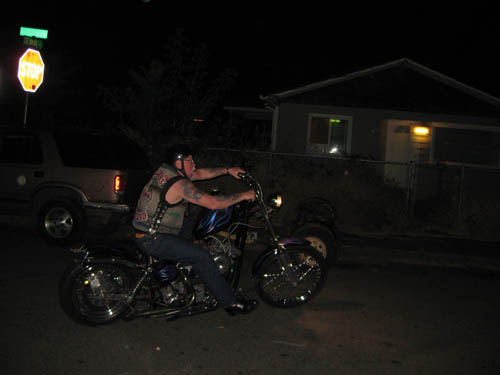 One time Rogues member Beer was at a party at Mud Creek in Southern Oregon. A tragic accident had killed several members on their way to the event that day. The spirits were low. The bad news had yet to sink in. Nobody said a word. Beer was standing next to Outsiders Fat City when a fellow member of the latter came blasting by on his homebuilt chopper. 'Look at my brother Franco' he said with a tear in his eye, 'ain't he looking cool?'. It was special, the way Fat City said it, hard to explain. On photo, Outsider Franco taking off on his homebuilt chopper early in the morning from clubnight, looking fucking cool as always!