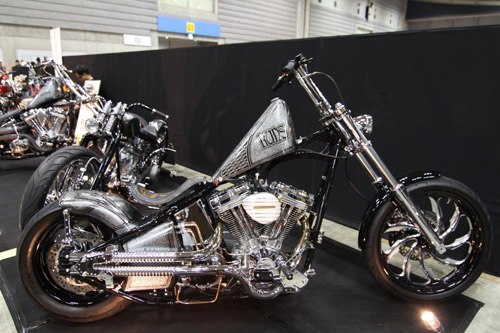 You might have noticed a preferrence for Highneck choppers in the Rogues. At the moment almost all custom bike magazines are focussed on the so-called old skool scene. When they do an article on a show that's all they photograph. People might get the impression that Old Skool is the only thing going on in chopper-country numero uno, Japan.  But besides a lot of bobbers and very cool Frisco style bikes they also build really nice new skool stuff in Japan. Bikes influenced by the great Jesse James for instance. West Coast Choppers with a Japanese twist. Love that gastank!