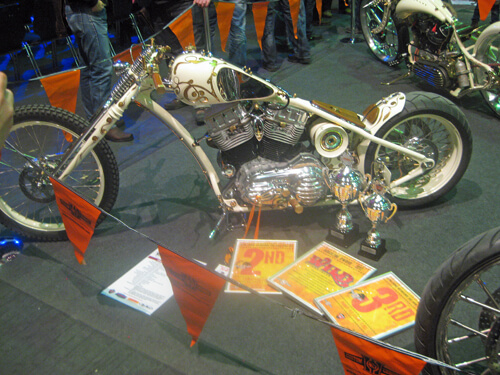 Rogues member Beer likes to play around with bikes at L&L every once in a while. He has built his wife's bike, The Warhippy over there. Paul who has like Sjaak, the owner of L&L NOTHING to do with our club,wanted to go to the Euro championship in Mainz with his vintage Sporty racer. Beer went with and took his Warhippy chopper. Both heavily modified Sportsters. Paul not only became second in the European championship in Mainz, he also got a trophee in the Jammer Old Skool Class and was chosen as most favourite bike by the crew from Wild Magazine, France! Beer says, 'I am fucking proud of that kid. He is only 21 years old and already wins from guys with decades more experience. Just wait until he is 35!' Next show, World Championship in Essen!