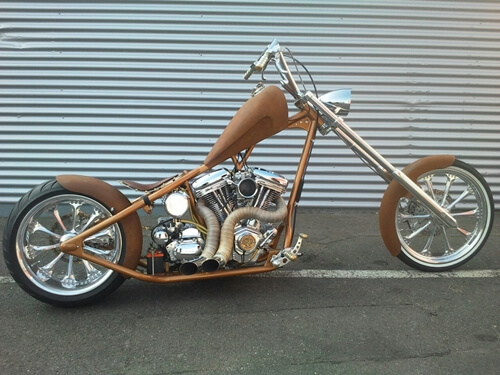 We love this style of chopper! Off course it is a style introduced by Jesse James of Discovery fame. But we have made the style our own. Made it affordable by making gastanks, pipes, oilbags and frames our selves. We mostly use Evo motors with a hotter cam and S&S or Mikuni carb but nothing fancy. We love them wheels but often cannot afford those either. So we look for used ones, or stock harley castwheels or even use jap-race wheels, mostly one jap rear and a custom lookalike in front.  It is a mixmatch of handbuilt and cheap parts and still we manage to keep that westcoast look. Some even call that the Rogues style, haha.

This particular chop was not built by the master either. It was built in Germany, we think by MB Cycles, Heidelberg. These guys build the coolest two wheelers. More about MB later and also more about RMC highnecks later (think we will do a special of our own highnecks soon)