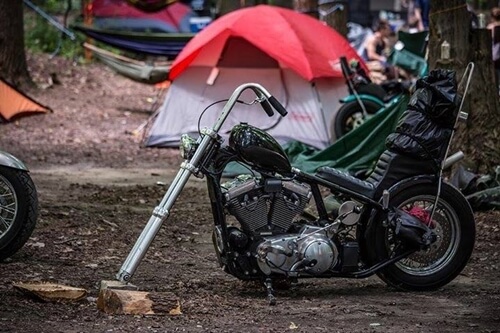 You wake up, look outside your tent and see this. Which Mutha Fucka stole that wheel? haha. Fortunately there is no stealing at all going on at the big chopper parties. Never has been , never is. We ourselves were once at the Peking Outlaw party thirty years ago and that is the only time(!) we know stuff was stolen. Don’t remember what, an S&S carb or something but guess what? With us being the only foreign club there, we got blamed…..No shit!  They even searched our tent.

That was the downside of Swedish Hospitality. Trust was always there, I mean some Swedish clubs even gave us the clubhouse keys sometimes when they could not be present at the house themselves but in this case we had lost the trust of the Swedes. Why? Probably because one of us got into a fight, another thing that rarely happened at Swedish biker parties. A big Turkish dude entered the field where the band was playing and started harassing people. Since not one of the Swedish bikers got into action, our member Brass grabbed that cameljockey by the hair and hit him in the face with his knee. Then he pulled him by the hair of the premises and kicked his ass outside. A lot of the Swedish bikers were disgusted but some thanked us. The next day that carb was stolen. The ones who hadn’t liked us solving that problem with the Raghead the Dutch way probably thought we had to be the ones stealing too, haha. Well we did not, and have never done such a thing. Actually when one of us sees somebody steeling shit from bikes he will most certainly give the guy a lesson he will never forget.