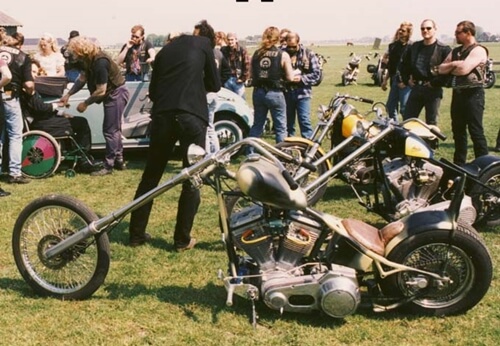 We don’t have many photos from the times we all rode Swedish style bikes but this is a good one. The Chopper on photo is Stud’s. An epic Rogues bike. When it was first built it was painted darkbrown candy, it has been candy apple red one time and here it is painted desert storm style. Stud’s bike had an experimental double walled Swedish made frame, 28(!) inch overstock frontend, multispokes wheels and a wide rear wheel suitable for the biggest cartire he could get. It had jockey shift and suicide clutch, a double dellorto carb,  and all the off sets to line up the primary and secundairy drive properly were not for sale yet and had to be handmade. Stud is one of our founding members and rode this bike like he stole it. He now rides a Bagger because of health problems but that has not one original bolt on it either and it is probably the fastets bike in the club. The other Swedish style bike on photo was Nol’s. Maybe we can get a better photo of that one too.