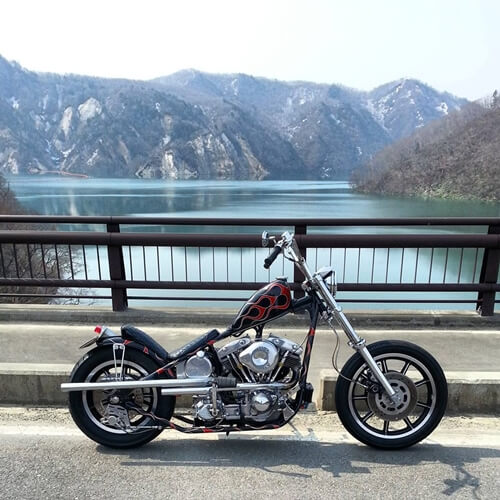 Sorry, dear owner of this bike, I am going to use your bike as an example to make a point. This is the type of choppers Jesse James loved and got his inspiration from. It were bikes like these that were racing through American towns in the late seventies and early eigthies, when long forks were still the trend and some guys wanted them but also missed the manoeuvrablity of the stock fork bikes. So they thought up a mix of both and invented a new American style that is still very popular amongst American clubs.  Jesse James took this existing stretched street-style and made it his own by turning them modern, with new big inch Evo motors, new lightweight aluminum wheels, better brakes. These type of choppers looked fast and aggresive and Jesse James made them look even faster aand more aggresive. He also made them quite a bit bigger. First he started with his own frames that were not only taller in the front but longer in the back too. Jesse than took this kind of Sporty tank with highered gascap (tanks like the one on the photo) as an example and designed one a bit bigger and better looking. An item that immedeately became a best seller. He then started fabbing things like them bent pipes nobody had ever made before, the iron cross airfilter and the magnum risers. He brought back in fashion the typical American high risers that are now so popular on clubstyle Dyna’s and much more.

BUT, we must admit, the Original, the first highneck choppers, looked fucking awesome too. Like this one here from Japan. A stretched hardtail frame with 33 degree neck (we are guessing) and maybe 4 inch over frontend. Not even that radical but looking so damn good and so much ‘chopper’. We love it! The owner’s buddies ride a mix of this bike and wcc styling. See the post above. toofasrt666.

The name ‘Highneck’ is made up by the Europeans. The Americans look at you as if you just shit on their plates if you call thier stretched Frisco Style choppers Highnecks haha.