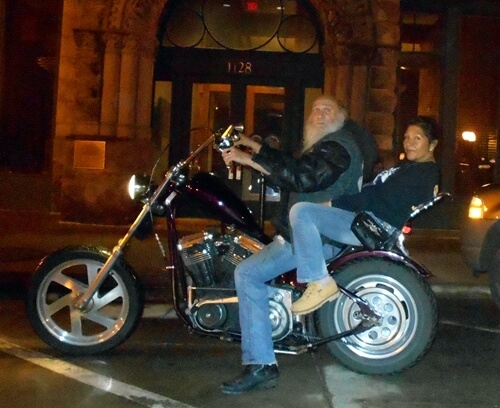 The man, the legend, the myth, Choppergod Tom Fugle is dead! He died sunday 6.30. Tom had cancer and allthough they certainly tried at the hospital, not much could be done in the end. He went home to die actually and his wife Jennie stood by him till the last minute as were his clubbrothers. We had contact by mail and phone but never expected this to happen so damn soon. Jennie had kinda hoped he would make Christmas….Tom was known in the biker scene since the early days but really became world-famous after Jesse James included some time to the man and the club in his documentary History of the Chopper. We got so thrilled by the things these old hardcore bikers were saying in that film that we just had to meet them. Through Deathraps president Jonathan we came into contact with Tom who invited us to come over. Later Tom and his clubbro Martin returned the favour by visiting us in Holland on their way back from Sweden.

Tom was a true lifestyle biker and one of the best promotors for keeping choppers alive. He has built and still was building the coolest bikes, was personal friend of the late David Mann and an allround artist to boot. Everything his hands touched was turned into art. No copy-cat here either. It was all out of the box what Tom did. Besides all that it was just a friendly guy with a lot of humor.

Tom we will miss you!

Jennie, and the brothers of El Forastero MC, we wish you the best, stay strong, our deepest condolances!