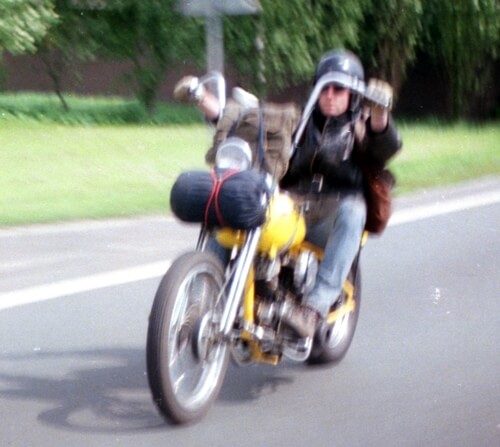 Early eighties: Rogues member Fonda heading for Denmark on his stretched and raked 45 flattie and we lengthened that springer too.

We as Rogues have a long history together and are very proud of it. It takes a long time to become a member of the Rogues but when you are , 9 out of 10 times it is for life! We have many members from the first hours still in the club.

Since day one we have tried to have as many choppers in the club as possible. We started with Japanese bikes that we tried to chop but soon traded them for Harleys. In the beginning we had a lot of cheaper Ironhead Sportsters and 45 faltheads in the club because that was the only thing we could afford. Later everybody was riding 74 and 80 inch Shovels. All chopped. Now it is a mix of everything. But most ride Harley Evo powered choppers

One thought on “Rogues MC History”