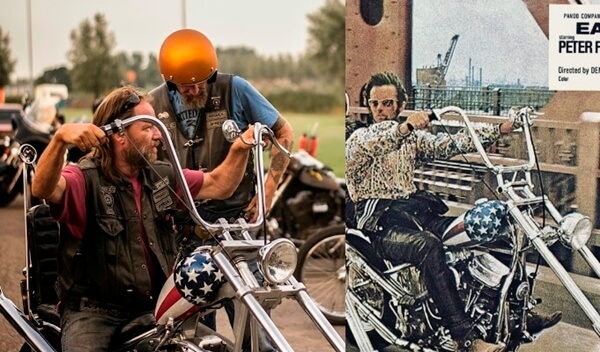 Our member Gerry and his Replica of the Captain America Chopper, Peter Fonda rode with in the movie Easyriders. Probably the most copied bike. Gerry bought it as such but it had a Shovel motor etc. So he is now perfecting it. Just installed a Panhead motor and the right tires.

We know there are more Chopper Replica’s out there. A few bikes David Mann painted out of his imagination for instance are copied as real life bikes. So with the help of you guys, we will show some more soon.

We prefer bikes that are actually on the road and not in museums. In our own archives have a photo of a Swedish made copy of the Billy bike somewhere too. And our own member Hond is restoring the bike he was photographed with for the European Choppers cover. It once was his, he built it, but sold it and then it got ‘ruined’. Later….