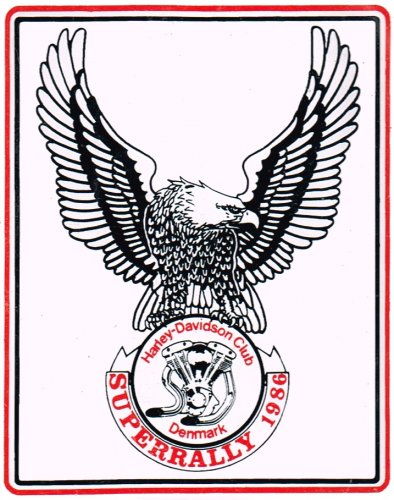 Well, where was I? Kliplev – Denmark 1986……. On Friday morning the 16th of May we left for Denmark. It was rather cold that day, 8 degrees Celsius. We had a stop at Nieuweschans at the Dutch border and a second stop just behind Hamburg. My older brother Toon had problems with his carburetor, which was very annoying.

We arrived Friday evening/night at about 03.00 hour. That night was horrible and Fonda can tell you all about it what happened during those late hours. He had some issues with his 6 volt battery and it the dark that’s a bit off a problem. On arrival we heard that the main stage party tent was blown over by the storm earlier and the temperature had dropped just below zero. The tent had to be put up as soon as possible again to and lots of people tried to make campfires to get a little warmer.

I told you Beer had a flat tire that night. So, the next morning, Beer and Schweik where busy mending the tire. It was a just such an ordeal to get a decent meal those days on the camp side at it costed 15 kroner. To expensive for my taste. I would have been better to get into town to get something to bite. But, as tough as were, we went for the lousy sandwiches. You could get a hot meal later on in the afternoon. And, not unimportant, we’d payed for it as well. Poor bastards…. But that ‘warm’ meal wasn’t much either. A small sausage and some potato sallade and last but not the least, you had to warm it up yourself.

The camp side was pretty wet and the roads were muddy. But, lucky for us, the sun was shining that Saturday. I was ‘investigating’ the terrain and made some pictures. My younger brother Blut had my old camera and made some photo’s those days a well.

Because lots off things were out of order and not well organised, lots of people went home on Saturday afternoon and Sunday morning the same picture. But off course we’re ‘Die Hards’ and stayed till Monday morning. The beer they served was expensive as well, but it came in a bottle with a nice Superrally Denmark label attached to it. I brought one with me to our clubhouse and put in behind the bar. It stayed there for many years until our clubhouse was set on fire. I’m not sure if we still have it. Time will tell.

Anyway, it would have been better if we left a day earlier, because on Sunday some ‘A’ hole found it necessary to steal my camera. Lucky for me that I just had taken out the full film and put in a new film-roll. So, the tit-contest and other pictures were safe. Beer and I went into the town to look for a police station and report my camera to be stolen. After many ours of waiting and explaining what happened, I finally received document for insurance purposes. I will get back with you lot about the tit contest and the trip back home. Also about a guy who was selling leatherwork for prices that didn’t fit my wallet. Because old slides and pictures degrade over time some of them look different.